As a young kid I become fascinated by the idea of climbing Everest. In the 80s it was still a very special achievement, before the days of guided climbs and traffic jams on the Hillary Step. If you were privileged enough to be picked to lead a summit attempt you’d be on the mountain only with your small team. After making a kind of pilgrimage to Everest Base Camp in ‘95 I started to treat it in more metaphorical terms, especially with my various academic theses. The image was still inspiring and I used this as fuel and focus. What I see more clearly now is that I didn’t really believe I that I could do something like this, something this hard, this demanding and something that required so much discipline and hard work. I’m seeing this now because I’m now doing things on a regular basis on the bike that would have been inconceivable to me not so long ago and as I do so the dream becomes a reality, goals are achieved and I learn to believe.

Friday, was a great day on the bike. It was a big day, the biggest yet for me really in terms of the sheer amount of climbing, over 4974m and 156km. It also included my biggest and most difficult climb yet, Lake Mountain, an Hors Categorie, or HC ranked climb over 20km long and rising some 937m. To get there we decided to ride up the Reefton Spur, a beautiful windy 60km road climbing 1300m from Warburton all the way to Marysville. You can see the ride map here 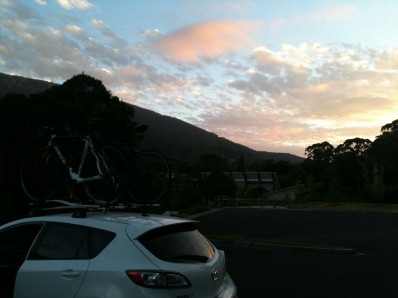 I was a bit nervous about committing to this one at first, despite the fact that it had been one of my goals for a while. But once I had, I just turned my mind onto preparation. I would be getting picked up from home at 5:30am so I wanted to get every detail in place the night before. Checking my spare tubes (which I never do) I found one already had a puncture. I’ve always liked doing this really focused preparation. I go into a quiet zone. I woke exactly one minute before my alarm was set, 4:44am, and managed not to wake up my baby boy. I felt great. Super relaxed. And rather than feeling scared that it might be beyond me I felt excited by that fact that I am now in a position to do this kind of ride without question. It’s a confidence I’ve earned. This gave me a feeling of lightness, quite a contrast to the heavy cloud of doubt that hung over me for the 160km ride to Marysville last weekend.

We were on the bike by 7am. The air was magic, cool and crisp. The ride up the Spur was beautiful. Neither my riding partner nor I had ridden this before so we didn’t know exactly what to expect. As we rode on and gradually higher we were greeted with wonderful views over forested mountains, many covered by trees still grey scorched by fire. Not long into the ride we passed the hotel at McMahons Crk which I had last visited to plant a tree as a memorial to an old friend, Lew, who was killed on his motorbike on this road back in 2007. The road is a favourite of bikes of all kinds and until a police crackdown began in 2009 motorbike deaths were a weekly event. Riding up the Spur for the next couple of hours, I was struck by the peace of the place. All we could hear was the gentle breeze through the trees and the sounds of birds. This was one of Lew’s favourite places and I’m pretty sure I know why. 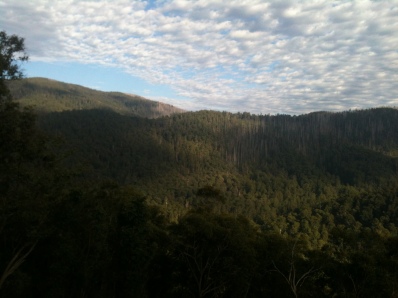 The ride out ended with a long steep descent into Marysville. I wasn’t really looking forward to this, but here too I just relaxed and focused on my lines through the corners. This descent would also be the start and the hardest section of the Lake Mountain climb itself and after a hearty breakfast, maybe too soon after actually, we began this 4.3km section. It was steep going down. It was much steeper going up. The gradient seldom dropped under 11%, often more. This is challenging to say the least and for the first time in a while I was having to focus on just keeping the cranks turning over.  When it gets like this I just focus on counting down the metres or the distance remaining, whatever make me feel more positive at the time. While I was finding this difficult, I knew I couldn’t redline it so early into the climb with 16km to go after this.

After cresting the most difficult part it only took a couple of minutes to recover but I quickly regained the feeling of lightness and energy that I’d had all morning. Maybe the coffee had kicked in, or maybe it was just the knowledge that the first real test was behind me. After another 6km at 5-6% we reached the gateway for the final 10km section up to the ski resort. After 7km of steadily cruising up my mate pointed out the lookout tower. It looked close, so I decided to go for it. My mate is usually stronger on the long climbs and he’d ridden ahead of me up the steep section but I quickly found myself alone and in my high tempo rhythm that I go into on my evening rides out to Arthur’s Creek, pushing it at about 85%. The corners came and went quickly. When the road leveled at all I pushed harder. When it got steeper I pushed harder still. I just felt great. And it stayed like this for the last 5km right to the end. As I pushed up the last rise I saw the main building. My heart surged. I sat up high, gave a cry and swept the bike around in a big arc. My mate wasn’t far behind, but riding back to meet him we clapped hands as we passed each other, a perfect sounding clap. I might as well have won a mountain top finish in the Tour de France. Usually feeling good at the top of a climb is not a sign that I’ve done a good time. Normally, after a personal best means on a tough climb I’ll actually feel a bit sick. But this was different. This was beautiful. 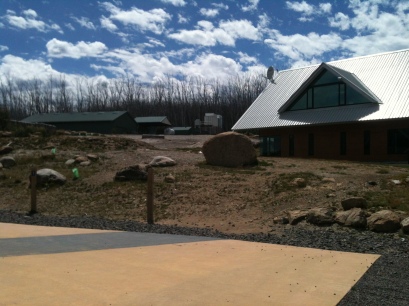 I could go on and on, but really you’ve just got to get out there, one way or another. There was the great descent down the Reefton Spur, redlining it for the last 20km into Warburton pushing at over 40km/h into a strong headwind, before finally cracking after the first 5km of Donna Buang. We had decided that we’d do however much we needed to get over 3000m of climbing for the day. It felt great knowing we’d done what we’d set out to do, that we’d paced ourselves well all day but also emptied the tank. And it felt great knowing that I’d seized this opportunity to achieve one of my cycling goals, and that I’d backed myself to do it.

Today as I was doing ordinary things like washing the dishes I remembered those final kilometres up Lake Mountain, as I rode into self-belief.

Thanks to Marc for providing the script to produce these Giro-style graphs: http://marc.durdin.net/2013/05/giro-style-elevation-graphs-for-strava.html

4 thoughts on “Climbing to Self-Belief”