It’s usually impossible to see the essence of an experience while it’s happening. If you’re having a great time there’s no need, and if you’re suffering and you haven’t yet mastered mindfulness, you’ll be too caught up in fixing and getting out of the situation you’re in.

Over time I have developed enough perspective on things to learn that no matter what I’m experiencing I’ll be really grateful for it in the future. It’s not always easy to invoke this but I have and it’s pretty cool because it shifts you into a much more positive energetic space which makes it much easier to make the connections and go with the events rather than just fighting them out of pure fear.

I had a great experience of using this a couple of years ago when I was in Greece. I was due to meet my wife in Italy for Christmas and I realised my visa was about to expire. I really panicked at first and this got worse while I tried to find solutions with government officials. The officials themselves were fine. The trick was finding someone at an office that was open. For several days I poured over different courses of action, spoke to different embassies etc. A number of new friends did as much as they could to help me also, acting as translator or enquiring on my behalf but without any luck.

Then in the middle of it I had a meeting with a complete stranger and telling him my story so far I arrived at a point where I told him that the one thing I knew was that somehow I would be really grateful for this experience. Acknowledging this in the middle of the crisis had an incredible effect. Within hours I had secured an invitation from another research institute and this meant that I could get a new visa from the Italians, god bless them, who were more than happy to help me where others wouldn’t. They even waived the fee.

Gratitude worked because it helped me to actually be in the moment more and to regain a calm and positive mind, something that was temporarily lost when I was stuck in fear.

But I’ve strayed from my original line of thought. Beyond gratitude, this experience offered me insight into certain truths. I’m don’t know what I’ve drawn from this one, except finding more evidence of the way we can find a way even when all ways appear closed when we are unstoppable and when we learn how to work with rather than against the forces around us towards our chosen end. That’s pretty big in itself, but I suspect there’s more to for no other reason than there always is 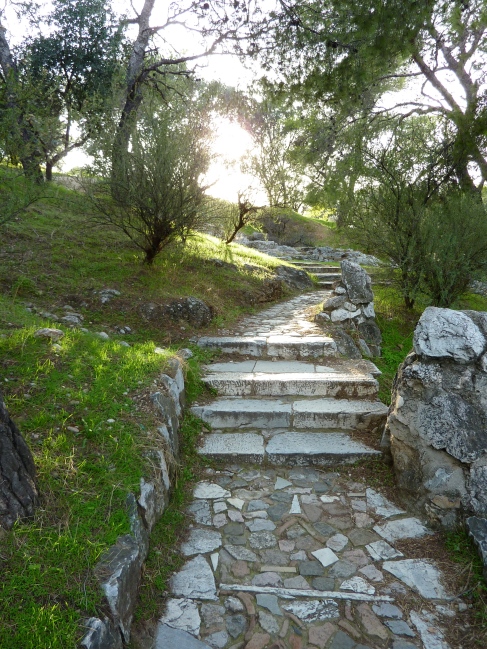 This is true for most significant experiences we have I think. Indeed, I’m inclined to see the accumulation of experience and truth in this way much like the creation of a great canvas or narrative. What we lack usually is any way of knowing what role this truth will play down the track. How will it shape you life in an essential way?

So my invitation to you now is to think back over a couple of major experiences and reflect on how they opened your eyes just a bit more.

The image above is of one of the paths on Philopappou Hill which is opposite the Acropolis. I love them because they’re made of a mix of ancient bricks and pottery and all kinds of other stuff. The past is still living and breathing in these places.

8 thoughts on “Your Truth”